The Bulgarian railway system consists of about 4,300 route km including 245 km of narrow gauge, much of which needs modernisation and upgrading to allow increased line speed and greater mechanisation of installation and maintenance.

NRIC wanted a supplier to provide an integrated sleeper and fastening system which not only delivered gauge widening, but also allowed the railway operator to automate an efficient installation, maintenance and stressing process. The assembly also needed to work with NRIC’s preferred method of panel track installation.

Following the success of a small trial of 267 sleepers at Gara Bov in 2012, NRIC contracted Pandrol to provide the Pandrol Fastclip FE fastening system on monoblock sleepers.

NRIC selected the FE-16673 gauge widening assembly. The Pandrol Fastclip FE system is a resilient, threadless, pre-assembled rail fastening system with low installed cost. The system is a self-tensioned fastening which generates toe load on installation, and was supplied with a 14 mm collar on the field side and 6 mm collar on the gauge side. The components were supplied pre-assembled on to monoblock concrete sleepers produced by sleeper manufacturer ZPSV.

Pandrol partnered with ZPSV in a joint agreement to develop the monoblock sleepers in ZPSV’s factory in Varna. Pandrol supplied the sleeper factory with a camlock-type FE shoulder holding mechanism. This required the conversion of the existing moulds to Pandrol FE. In total 30 sleeper moulds were converted, with each mould incorporating five sleeper cells. Throughout this process, Pandrol engineers were in attendance to ensure the sleeper accuracy and quality was maintained, and all the necessary inspection gauges were designed and supplied.

The finished sleepers were transported by rail from ZPSV, and built into panels at Anton station. The running rails of a redundant secondary line were used as a level bed for alignment of the sleepers. The panels were assembled in lengths of 36 m, with a sleeper spacing of 0.58 m on tight curves. There were either 58 or 62 sleepers per panel depending on the curve radius. Each panel was then stored to a maximum stack height of nine sleepers.

The installation was undertaken by contractor TRACE using a Track Panel Laying machine to lay the panels sequentially. This is a three-stage process: Panel Lifting, Panel Transporting and Panel Laying. This machine was used effectively to lay all 175 pre-assembled panels. During the panel building stage, two Pandrol Rosenqvist CD200 clip driving machines were used, capable of clipping, extracting and sleeper lifting. Pandrol technicians provided full training support for use of the machinery and handtools.

“The CD200 machines enabled each panel to be ‘clipped-up’ in under 10 minutes.” 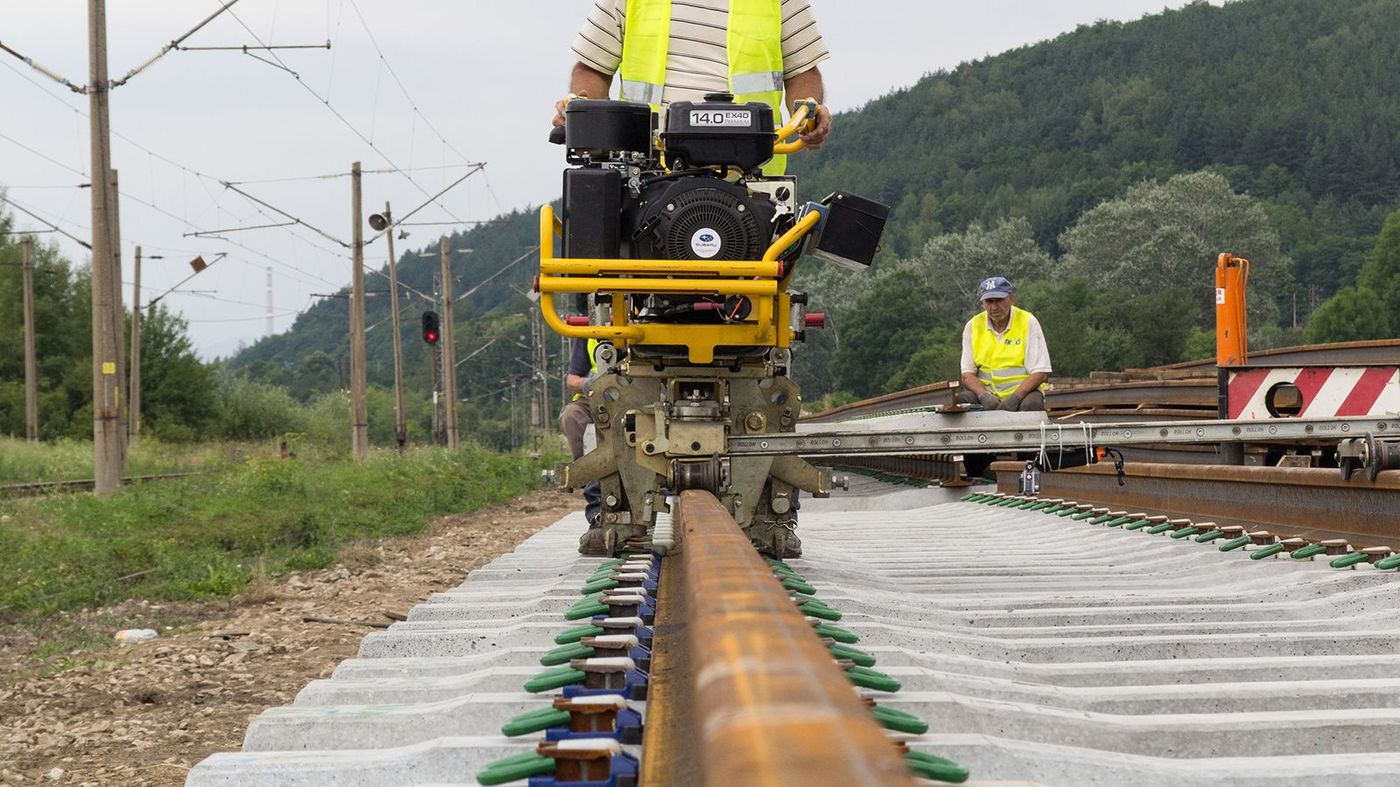 The track was open to traffic in early October 2014, with installation undertaken in less than 3 months. Pandrol worked with the rail operator, the contractor and the sleeper maker to ensure that installation efficiencies were maximised.

Fastclip FE is an economical fastening offering opportunities for installed savings through the use of high output, mechanised installation equipment. The CD200 machines enabled each panel to be ‘clipped-up’ in under 10 minutes. After seeing the Rosenqvist CD200 machines in action, the Bulgarian contractor, TRACE, ordered two additional machines for their own inventory.

Delivering a key customer requirement, the FE-16673 allowed for NRIC a total gauge widening of 16mm across both rails.

The Vortok Stressing Roller integrates the rail jack, under roller and side roller functions into a single unit. This ground-breaking innovation has had a phenomenal impact in lowering possession times and other costs, and increasing efficiency and safety. The Vortok Stressing Roller simplified the rail stressing process by replacing 3 pieces of equipment with a single device, and reducing manpower requirement by approximately 50%. 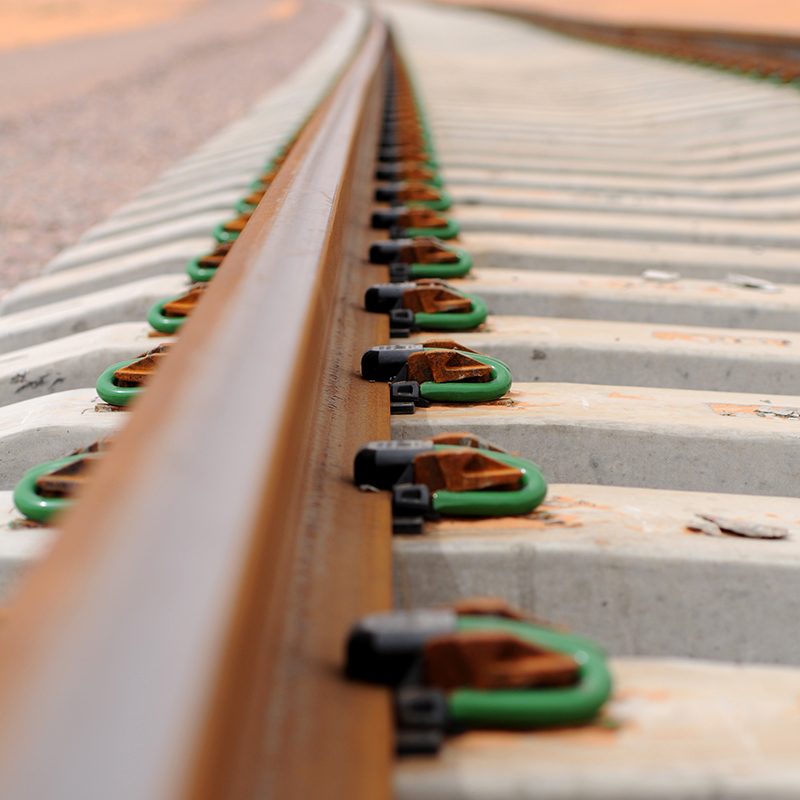 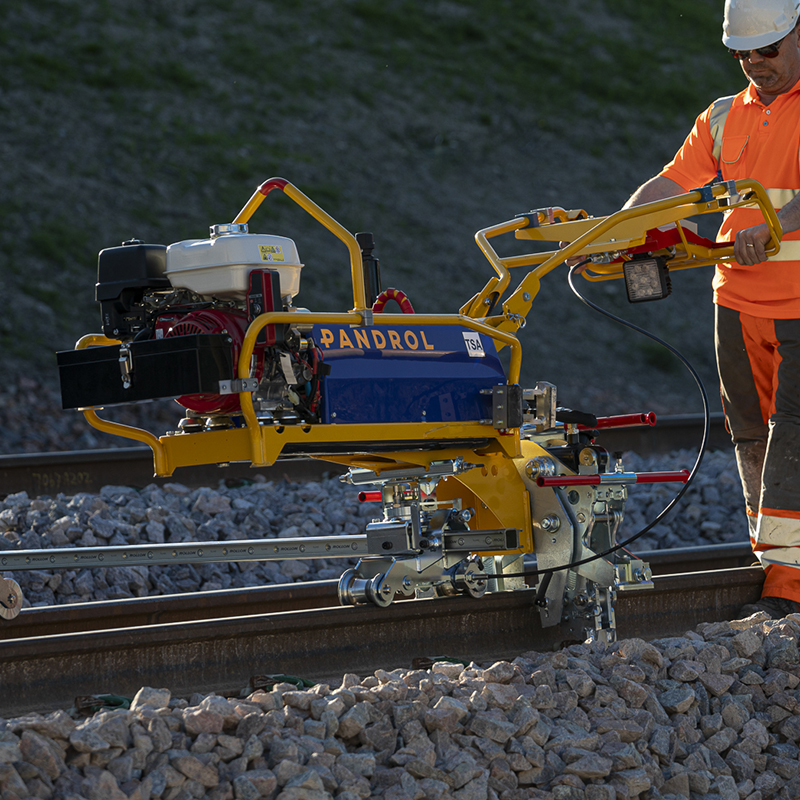 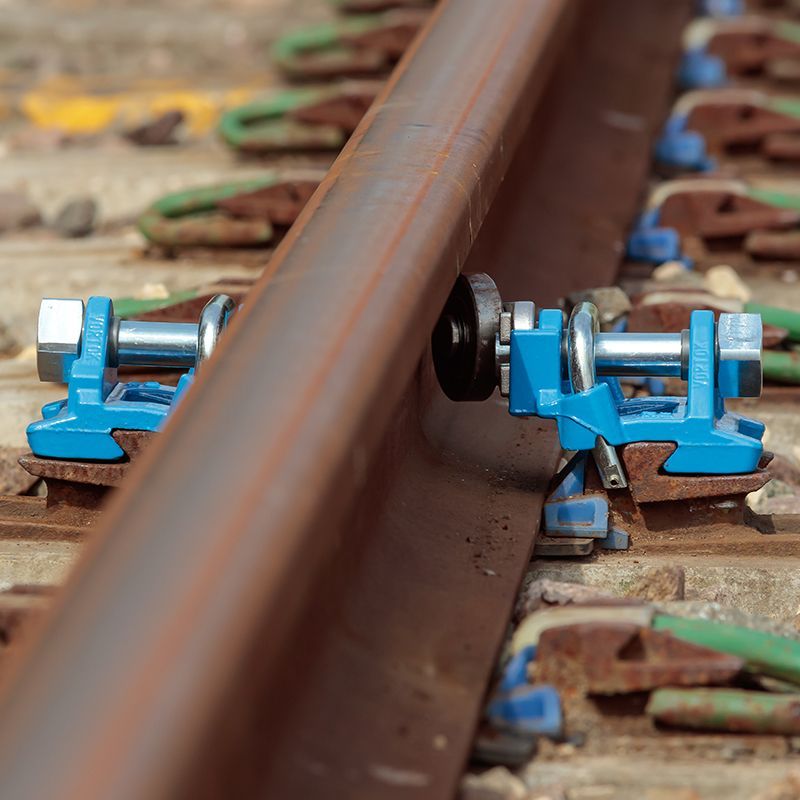